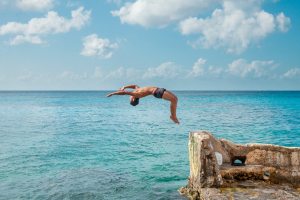 Delve is an interesting part of Office365.

In my previous organization I often received complaints about what was shown in Delve. Exactly like the results you see in Search, what you see is what you have access to, and for many people this was hard to understand. Every time the Search or Delve results got questioned (“Search is broken!”) I could prove that this person saw this search result or this document card on Delve because they had access to it, whether that was desired or not. I loved this demonstration of the importance of proper permissions management 🙂
In Search, any mismanagement of permissions only becomes apparent when you are actively searching, but in Delve “content finds YOU” so it is ruthlessly in-your-face.

Joanne Klein has written a great post on Delve and how to disable it – entirely or partially.

In my current organization we have not promoted it very much yet, so when we recently changed a number of licenses from E1 to F1 and then to F3, we did not consider the fact that the Delve app would no longer be visible for the F3-users, a big risk.
However, we received a question from someone who uses the people-part for looking up managers and direct reports, so I found three alternative options.

After all, the Delve “Me” page is your profile page, so that should be available for every user. Just click on your picture top right and select “My Office profile”.

Delve is available for users if they are logged in to Office365 and use the following URL: https://<datacenterlocation&gt;.delve.office.com.
For our organization and my own tenant this is https://eur.delve.office.com and for a tenant in the UK this would be https://gbr.delve.office.com
I do not have access to any other tenants so I can not give you the “code” for other data centers but please take a look at your Delve to see what it is. It may come in useful one day.

3. Via Outlook (people data only)

Like Delve, Outlook also uses Active Directory so all people data is also in Outlook.
Users with an F1-license use the Outlook On The Web experience and they can see people’s managers and direct reports in the people card.
When you hover over a person’s name (searched or from an email) you will first see the small card, which expands into a larger card. When you click “Show more” you will see a ton of info, including the “Organisation” which will allow you to see a person’s manager and direct reports. In my case the tab is greyed-out because I am the only one in my tenant and have not set up AD.

What’s next for Delve?

My colleague was happy with the alternatives provided.

But when I found this all out I wondered if Delve may be going away as a separate workload as the functionality is now embedded in other, more frequently used, tools. Would anyone know?
Just as I was writing this post, I found this post from John Liu (in response to a Tweet about Delve from Joanne Klein) who is also wondering about the future of Delve – he has a good idea for its development.

So let’s wait and see if Delve keeps being a separate app, but with added functionality, or will be absorbed into relevant other workloads in Office365…