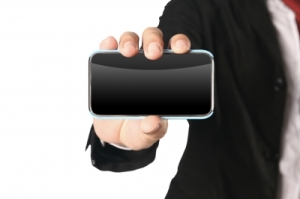 The BlackBerry was all the rage in the corporate world. Everyone wanted one, and only senior management had one at that time. Having a BlackBerry meant you had arrived!

That year our team launched an “icon” on the BlackBerry’s home screen, that opened a small part of our intranet. That part of the intranet that we thought would be useful if you were not in the office.

This must have been one of the first mobile intranets. It was created and introduced by another part of the team I worked in, and all credit goes to the people who had the foresight and the skills to come up with the concept and make it happen. With this post I want to give them the applause that they deserve.

While reading about mobile intranets, and people proudly showing that they have features such as an employee directory especially for mobile use, I suddenly remembered our old BlackBerry app and that I still had some screenshots. So, for history’s sake, here are some more details. Remember that all information shown is outdated.

The intranet “icon” was automatically pushed to your BlackBerry, but not everyone was aware of it, or how you could use it. Of course we communicated, but we did not reach everyone. But everyone who knew about it, was very happy with it. It was still functioning when I left the company in 2011.

This was the icon. It showed our intranet’s logo.

If you clicked it, you could choose 3 options.

This was updated regularly throughout the day. I have not used this much myself, but I know there were people who could not do without it.

We showed Corporate News and External News only, because we could not target the regional and local news, as we did on the regular intranet Homepage. When I was sitting at an airport, it was good to be able to learn about organizational changes as soon as they were posted. I might have been on my way to a business manager who had made a promotion…or a sudden exit :-).

This was really useful for me, especially when travelling. You could search for someone, and their name, position, telephone numbers, email address and assistant would be shown. I have often used this functionality  when my plane was delayed or cancelled, or when I just wanted to email or call someone while being on the road.
If anyone in my audience is still  discussing an employee directory for use on-the-go: yes, this is useful. I think it should be one of the first things to implement on a mobile intranet!

I hope you liked this little blast from the past! 🙂

If you would like to see more modern mobile or responsive intranets:

4 thoughts on “The oldest mobile intranet in history?”