We have all been talking about using video’s ON your intranet, but what about video’s ABOUT intranet? After seeing a very good intranet teaser recently, I thought I’d collect a few more for you.

I have used the search words “intranet launch” and “intranet teaser”. These allowed me to focus on video’s used at (re)launch.

View my collection on List.ly 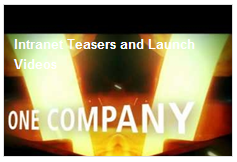 Some observations from my “research”:

Some of the more noteworthy, in my opinion, are the following:

Usually intranets focus on communication and employee productivity. So it was a nice surprise to learn that this intranet is “doing its part to make DBS a fun place to work”.  Picture sharing is also a more important feature than I have seen before, especially for a bank! Note: Unfortunately, this video has since been removed from the internet.

Boyband JLS introduce an intranet for an unknown organization. It looks as if someone had an impromptu idea and just followed up on it…and the boys happily went along.

The new intranet video for Pierre & Vacances/Center Parcs groups contains a lot of obscure animation, but it has such a happy feeling about it that it made me smile. Well, this is a holiday company, so that is very suitable!

I was really intrigued by this one. It has a rather spacey animated intro, then switches to a traditional “talking head” video with the CEO. The executive has a very modern message: Global Container Terminals has a new social intranet, the name has been determined by contest, and he announces the winner. But he is sitting in a rather outdated office with some very interesting accessories – what is that worn wooden box doing there, or did he forget to remove his suitcase from his desk? Whose are those pictures? I had to watch it 3 times: the first time to watch the CEO, the second time to watch his office, and a third time to hear the message. See it here!
(If there is any learning from this video it is: “remove all visual distractions if you want to focus on the spoken message”…)

And this is the one that started this all. Some people think it is over-the-top, but if your company is called MAN Diesel and Turbo, you make heavy engines and your intranet is called Atlas, you do not feature pink glazed cupcakes or white fluffy rabbits in your intranet teaser. Instead, you show molten metal, welding sparks, powerful words and add heavy music. I think it is brilliant!

This is my list. Do you know any intranet launch/introduction video’s or teasers that should be added to the collection? Please let me know!

11 thoughts on “More than 30 Sneak Previews to intranets”